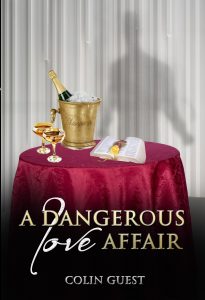 The story starts when John, a struggling author, attends a book launch in London. He has gone in an attempt to obtain an agent to represent him. Unable to do so, he retires to the bar to drown his sorrows. To his astonishment, Sally, a famous best-selling author comes up and starts to talk with him. She invites him to join her for lunch during which she gives him her phone number. Despite being twelve years older than him, they get on well. John first thinks Sally could help him with his writing, but soon finds himself wanting to spend more time with her. After Sally invites him down to her house in Guildford for the weekend, she tells him her real name is Tara. Sally is the pen-name she used for her writing. In Guildford, their feeling for each other turn to love and romance, with them enjoying erotic love-making sessions.
While later up in London, Antonio, Tara’s ex-lover who still loves Tara, sees her and John a restaurant. When they leave, he follows and learns various details about John. After Tara returns to Guildford, Antonio steals a car and runs John down. Tara goes to stay and take care of him, and while there, they decide to take a holiday in Thailand.
Once John is okay, Tara returns home leaving John in London. On his way to a meeting with Ian, a friend he helps with his business, John is lucky to survive a terrifying car crash after a wheel comes off his car. Fortunately, he is unharmed, and the couple goes off on holiday to Thailand. While there, they experience the thrill of seeing and touching a whale shark. However, their pleasure is spoilt when Tara is stung by a Lionfish. In Bangkok, they see a live sex show, which leads to them enjoying another new experience. Before leaving Thailand, Tara is shocked and delighted when John proposes marriage. However, unknown to them, a guest had taken their photo and posted it on Facebook. When Antonio sees this, his anger knows no bounds. He decides that his next attempt on John’s life will be successful.
The action then moves back to England. While preparing for their engagement party, Ian, John’s friend asks for his help in London. He is there when Antonio kidnaps Tara and takes her his villa in the Italian Alps. He plans to lure John there, where he will arrange for him to have a fatal accident. On finding Tara had disappeared, John asks his policeman friend Paul for help. His enquiries reveal a large Mercedes with foreign number plates had been seen in Tara’s street around the time she disappeared. The Italian police go to Antonio villa, but he convinces them she is not there.
John feels sure Antonio is behind Tara’s disappearance, so he goes to Italy in
a search of her. His attempt to land on the roof of Antonio’s villa by using a paraglider is foiled when Antonio appears. He informs Tara that next time John tries to rescue her, he will catch and kill him. Given this, Tara decides she must escape. After playing the same trick on Antonio as he had done to her, Tara makes her way up to the roof. She is about to leap to safety using one of Antonio’s paragliders when he appears. While making a desperate attempt to stop her, Antonio falls to his death.
Once Tara is back on the ground, she goes searching for John. He is relieved to see her but shocked when she says Antonio won’t be bothering them again. During a stop on their drive back to England, a news flash catches their eyes. It is about a villa high in the Italian Alps that had been destroyed by fire. Although no names were mentioned, both feel sure it’s Antonio’s villa. Tara swears she had nothing to do with the fire. John says with the villa destroyed and Antonio dead; there is nothing to contact her with either incident.
Back in England, during their belated engagement party, John and Tara decide to get married. When a publishing agent Tara had invited comes over to congratulate them, he hears Tara is helping John write a new book. He tells John that once completed; he would like to see it. On this joyful news, the story ends.

Why did you decide to produce an audiobook?
I have a number of audiobooks and thought this story would prove successful. With sales steadily rising, my assumption was correct.

How did you choose the reader for the book and the production company?
I went through a number of narraters on Amazon ACX who were prepared to take a chance on doing the book on a royalty only basis. Holly Holt has proved a good choice, with her going another romance story of mine that is mixed with erotica, later this month.