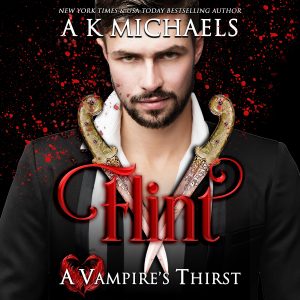 Lost in a foreign city, ancient Vampire Flint, finds himself facing the toughest battle of his life. What was supposed to be a vacation has turned into a battle to save a young Scottish lass in danger as well as his own sanity when he’s struck with a mysterious Thirst. One that he’s finding hard to control and he’s terrified that if he slips down that route he may never return.

With a horde on his tail and the beautiful and injured Kenzie McBride in his arms, he’s struck with the revelation of who and what she is; the most elusive and precious of things in the whole damn universe: a Vampire’s Bloodmate. His Bloodmate. And he’ll fight to the death to keep her safe from anyone who comes after her. Anyone.

The hunt is on, the battle fierce. Only the strong survive a Vampire’s Thirst!

What was your inspiration for this book?
Flint is Victor Strong's bodyguard – Victor is book one in this series and I just had to write Flint's story after writing Victor. Flint is hard as nails and it shows in the story, but he also has a softer side … only with one person though. He has the fight of his life on his hands in this story, and I absolutely love writing action scenes, and when he's angry … gosh, he's not someone to mess with and when someone he cares about gets hurt … what can I say? All hell is let loose and that's where I allowed my imagination to go a wee bit wild with this story. Flint needed his own book and this is it, blood, fury and a love that's just magical included.

Why did you decide to produce an audiobook?
Quite simply because there are people who love to listen to stories and after Jason Hill narrated Victor, the first in this series, I was astounded at how good he was! I couldn't wait to get him to do Flint and he'll be doing Quinn too … which is the next of mine in this series.

How did you choose the reader for the book and the production company?
ACX was recommended to me and I'd put Victor, the first in this series, up for audition on there. I had a lot of people audition before I found Jason who narrated Victor and Flint – he's amazing!