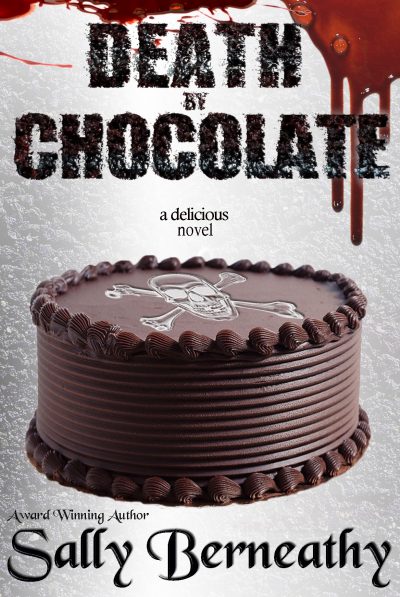 How Did You Come up With Your Characters?
My heroine, Lindsay, loves to make chocolate desserts, an evil ex, and a snarky sense of humor. There are those who say she sounds a lot like me. Well, I do write her dialogue. Fred is loosely based on a friend I went to high school with. It occurred to me one day that I'd known him for most of my life but didn't really know a lot about him. What secrets was he hiding? Fred gets his own fan mail, which I forward to my friend. King Henry, Lindsay's cat, is my cat, Leo, who now lives only in my books. He came up one day and announced he was living with me, just as King Henry does to Lindsay. Fred and Henry are my favorite characters.

Book Sample
Seated on Paula’s sofa, drinking Cokes and eating chocolate chip cookies, Paula, Zach and I laughed. I’m sure Zach didn’t know what he was laughing at, but his mommy and his Aunt Lindsay were laughing, and that made him happy.
A knock on the front door stopped the laughter.
Paula’s eyes went wide, and the blood drained from her face. Total terror. She used to do that regularly at work, freak out every time somebody came into our shop. Fortunately for our profit margin, many people come in every day, and she finally got used to it, but visitors at home were apparently still scary. Of course, she didn’t normally have visitors at home except for the postman and me.
I was sitting on the sofa and the mail didn’t come on Sunday.
She set her cup on the table, her hand shaking so badly the coffee sloshed onto her fingers.
“I’ll get it.” I bounced up, handed Zach to her and was at the door before she could protest.
Not that I think she was capable of speech at that moment.
I opened the door to see two cops on the front porch—a Suit and a Uniform.
The Uniform looked like a nice guy…young, pleasant expression, a little apologetic as if he hated to interrupt somebody’s Sunday morning. In contrast, the Suit’s face was a study in sharp angles.
The Suit flashed his badge. “Police,” he said, as if I couldn’t recognize the uniforms—both of them.
I lifted my chin and looked down my nose at him. “Chocolatier.” I couldn’t help myself. Blame it on the Coke and cookies. With all that sugar and caffeine, I was feeling ten feet tall and bullet proof.
The Uniform looked puzzled but one corner of the Suit’s mouth quirked upward as if he wanted to smile but knew he shouldn’t.
He looked me over from my messy hair to my bare feet, so I did the same to him—not that I could tell much from the blue suit, sedate tie and white shirt. Well, the tie was knotted a little crooked and the white shirt was kind of rumpled. Add all that to the way he’d almost smiled at my joke, and I was prepared to like him…unless he wanted to write me a speeding ticket.
“Are you Paula Walters?” he asked.
“No.” I felt reluctant to volunteer any information, and not just because of my paranoia about traffic tickets. I could sense waves of fear emanating from Paula who remained on the sofa behind me. She was always a careful driver, so careful I sometimes wanted to lean out the passenger door and push off with one foot to make her go faster. This wasn’t about a speeding ticket.
“Is Paula Walters here?” the Suit asked, exasperation evident in his voice. The angles of his face seemed to become even sharper.
“Yes,” I answered.
He waited.
So did I.
“Could we speak to her?” He was practically gritting his teeth. Now I was the one who had to suppress a smile. It’s not often I can frustrate a cop though I always make an effort.