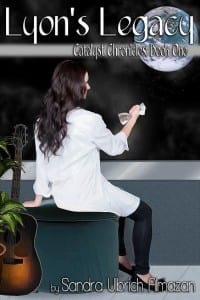 Sometimes being a geneticist isn’t enough to understand your family….

Joanna Lyon is the great-granddaughter of the legendary TwenCen musician Sean Lyon. She may have inherited her ancestor’s musical talent, but her parents’ bitter divorce and her Uncle Jack’s attempts to remake her into another Sean have left her hostile toward her family and music. Her passion is for science, but since she has no access to the family funds, she struggles to earn enough credits for graduate school. Then her uncle sets up a business deal with her employer to make Joanna go on a mission for him: travel via the spaceship Sagan to an alternate TwenCen universe where Sean is still alive. Joanna must collect a DNA sample from Sean so her uncle can create a clone of him. She refuses at first, but finally agrees to go. Secretly, however, Joanna believes her uncle will exploit the clone, and she plans to sabotage the project to stop him. But when she falls in love with one of the scientists in the Sagan’s genetics lab, clashes with other time travelers who fear she’ll change how history develops on the alternative TwenCen Earth, and receives devastating personal news, Joanna will find herself pushed to her limit even before she comes face-to-face with her hated ancestor. Their encounter will leave her changed forever. Will she still be able to thwart her uncle’s plan, and what will she have to sacrifice to do so?

What was your inspiration for this book?
I’m a big Beatles fan and wanted to write a scene with an observer from the future traveling back in time to watch them perform at the Cavern in Liverpool. From there, I started asking myself questions as to why the traveler was there and what her goal was. This helped me developed my main character, Joanna. I eventually rewrote the story to be about a fictional rock star instead of the Beatles, but I tried to retain some of their flavor. When you wrote the book did you know you were going to offer it as an audio book?
No, I didn’t know how easy it was for independent authors to create audiobooks of their work until after I’ve already published Lyon’s Legacy.

Why did you decide to produce an audio book?
I put my book into audio format so it could reach a wider audience.

How did you choose the reader for the book and the production company?
I submitted my audiobook project through ACX. A couple of people auditioned for the work, but the second reader did a great job of capturing my main character’s personality.

If someone is thinking about creating an audio book, what advice would you give them?
Go through Audiobook Creation Exchange (https://www.acx.com/). It’s a service that connects authors with producers and narrators, then distributes the finished project.