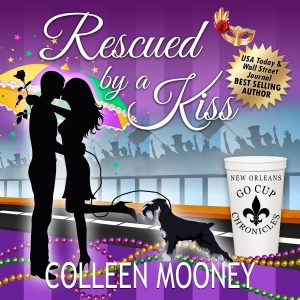 Brandy Alexander is watching a Mardi Gras parade in her Irish Channel neighborhood when everything changes in one dramatic moment. She kisses a handsome stranger in a marching group and he whispers in her ear to meet him at the end of the parade.

Brandy’s decision to meet him puts her in the midst of a shooting and when he asks for her help, Brandy finds herself on an adventure to a Bourbon Street strip joint, Charity Hospital, a gay nightclub and meets some quirky characters not out of the ordinary in a city that knows how to party.

There’s no place like New Orleans to have a good crime.

From the Series
The New Orleans Go Cup Chronicles

What was your inspiration for this book?
I grew up in New Orleans and when I was transferred to different cities while working for AT&T I realized how different many transitions and customs were in New Orleans compared to places I transferred to. A couple of big things I had taken for granted here are King Cakes, King Cake parties and kissing a handsome man at a parade in exchange for a flower.

Why did you decide to produce an audiobook?
I decided to produce audiobooks for two reasons. One, I enjoy listening when I can't read a book, like exercising or driving. The second reason came from some of my fans who told me they can't always read due to vision issues and they wanted to hear more of my series so I started them on audio.

How did you choose the reader for the book and the production company?
I listened to many readers looking for someone who had a New Orleans accent. New Orleans is not a true southern accent but a cross between Brooklyn, New York (I know because I lived in NYC) with a hint of the south. I also gave the reader unique words and names we have here in New Orleans and she said them all perfectly.