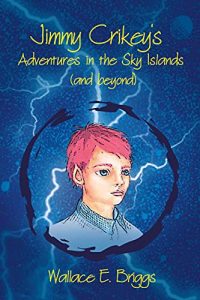 Jimmy Crikey is the orphan alien who chose to live on Earth.
Once bullied beyond endurance Jimmy developed his abilities to protect his new Roombelow home from the dangers that threatened.
Far above Earth, the Sky Islands are invaded by the galactic race of Zyrons.
It needs Earth’s four witches, the ancient Weatherman and the developing magic of the tiny apprentice witch, Jade, to overcome the invaders, with a little help from Jimmy Crikey and XRU.
The Weatherman disappears and the witches unite to search for him throughout the Solar System in Jimmy’s starship.
Their search takes them to the hidden caverns of Mars where stick-like beings called Ropians live below the surface of the barren planet.
The Ropians become an interplanetary threat when their need for water threatens Earth.
The supernatural forces of the four witches, the wisdom of the Weatherman, the knowledge of Jimmy and XRU, combine to challenge the threat.
Will victory assure freedom for the Weatherman?

What was your inspiration for this book?
During a showery seaside holiday my son and his new found friends took shelter in our beach tent. Something was required to hold their attention for a while and for the first time evr=er I made up a story 'on the hoof', as they say. Among the children was one who was being made to fetch and carry, mild bullying buy nevertheless bullying. He happened to be the smallest and he had bright ginger head of tusseled hair. He became the hero of the story and he rose the others and overcame his detractors by shining above all the others. The story needed some magic and so the four witch guardians of Earth's realms were born. They operated along side Lord Oron, The Weatherman, who patrolled the clouds in his cloud adding his magic into the mix. Gemma, the little lady Jimmy rescued from the bottom of the well (but didn't know how she got there) became Jimmy's closest friend. Add in some monsters, some mayhem, a flood and little people who mined diamonites and the story grew over the course of several showery afternoons to meet a demand,

Why did you decide to produce an audiobook?
I was approached by Outfox Studios for kids and John Finch and his crew of actors who offered to convert the story into a magical production complete withy musical accompaniment. John died just he was beginning the second Jimmy Crikey Adventure story.

How did you choose the reader for the book and the production company?
Paul Enright King the original narrator offered to complete the second project on a reduced scale and made an excellent job of producing Jimmy Crikey's Adventures in the Sky Islands.