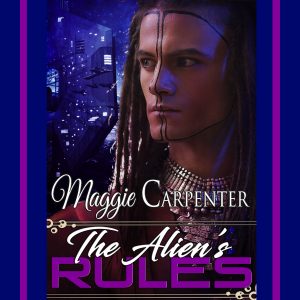 After several months of exceptionally vivid, wonderfully sexy dreams in which she is visited by a mysterious stranger who punishes and pleasures her as he sees fit, one night Ellie awakens to find herself in an unfamiliar place. She is lying naked on a table in an odd, purple-lit room, exposed and vulnerable, and the man who looms over her is devastatingly handsome yet definitely not human.

Introducing himself as Valodar, he gently explains that he is an alien from another world and he has been visiting Ellie in what he calls the dreamscape. Certain that she is the perfect woman for him and wanting her to experience life as his mate, he invites her to stay with him, but he makes it clear that she will have to submit to him completely.

Though his warning that she will be thoroughly spanked for any disobedience gives Ellie pause, Valodar’s mere presence leaves her yearning for his touch and she cannot resist accepting his offer. She quickly discovers that Valodar possesses unique physical traits, and he sends her tumbling into one shattering climax after another, claiming her more thoroughly than she would have ever thought possible.

But even as love begins to blossom between the dominant alien and the feisty human girl, their growing passion is interrupted when the Earth suddenly falls under threat from a cunning and ruthless alien race. Valodar insists that she must leave the matter in his hands, but can Ellie sit idly by while her world is in peril?

Publisher’s Note: The Alien’s Rules includes spankings and sexual scenes. If such material offends you, please don’t buy this book.

What was your inspiration for this book?
I saw a UFO. I really did! Then I remembered tales of alien abductions and this book emerged.

When you wrote the book did you know you were going to offer it as an audiobook?
No.

Why did you decide to produce an audiobook?
I found a fantastic narrator for another book I was producing and it was just so obvious that I should produce it with him.