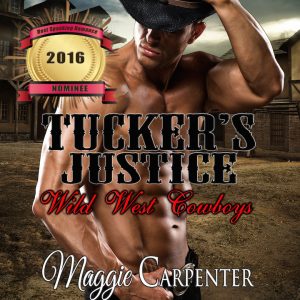 When hardened gunslinger Tucker Prescott is tasked with bringing law and order back to a town overrun by a gang of criminals, he quickly realizes that his biggest challenge won’t be the villainous McGill brothers. The one who will truly put him to the test is Dolly Baker, the beautiful, feisty 22-year-old daughter of the man who hired him.

From the moment she barges into his cabin uninvited, Tucker knows Dolly is going to be trouble, and it isn’t long before she tests his patience one time too many and earns herself a sound spanking. The embarrassing chastisement gets her attention, but it will take quite a bit more than a few smacks on the bottom to teach her obedience, and the more he sees of Dolly, the more Tucker is forced to admit that he would love to be the man to properly tame her.

Tucker didn’t come to Spring Junction to keep a woman in line, however, he came to deal with the McGill brothers and their gang. He has a plan to do just that, but it will depend on his quick wits as much as his quick draw, and despite his best efforts Tucker can’t get Dolly off his mind. Can he bring the outlaws to justice and make her his bride before she drives him to distraction?

What was your inspiration for this book?
I wanted to write a different kind of historical western.

When you wrote the book did you know you were going to offer it as an audiobook?
No.

Why did you decide to produce an audiobook?
I thought it would translate well.

How did you choose the reader for the book and the production company?
ACX – when I heard the narrator's voice I was drawn in to his smokey, engaging style.