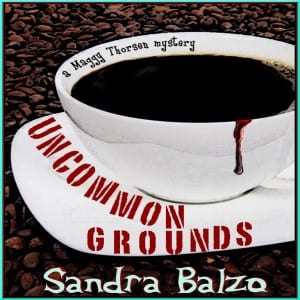 Maggy Thorsen, displaced PR executive turned desperate coffee maven, sets out to discover who killed one of her partners before their new business can go, quite literally, down the drain. As if that weren’t challenge enough, she has to do it while keeping the town’s tennis moms and senior citizens from ripping each other to shreds, and her third partner — the one who’s still alive — both upright and out of jail.

Along the way, Maggy manages to incur the wrath of Brookhills’ self-important new sheriff, Jake Pavlik, who apparently doesn’t recognize the redeeming social value of a really good cup of coffee. She also stumbles over small town politics and unbridled ambition — not to mention rampant infidelity — on her way to a truth she’s suddenly not all that sure she wants to know.

When you wrote the book did you know you were going to offer it as an audio book?
This is the first in my Maggy Thorsen coffeehouse mysteries and I had no idea when it came out in 2004 that it would be an audiobook, since my books are primarily sold as hardcovers into libraries. Uncommon Grounds is now out of print and I’m thrilled to have it available again in audio and e-book.

Why did you decide to produce an audio book?
Uncommon Grounds, the first of my now 8-book Maggy Thorsen Coffeehouse Mysteries, was published by a different publisher than the other seven books. Since it’s now out-of-print, I was eager to make it available as an audiobook (and e-book), so people could start with the first in the series.

I now have the first four in the series available* in audio, with three more** under contract and coming soon.
*Uncommon Grounds
*Grounds for Murder
*Bean There, Done That
*Brewed, Crude and Tattooed
**From the Grounds Up
**A Cup of Jo
**Triple Shot

How did you choose the reader for the book and the production company?
I worked with ACX and found my narrator, Karen Savage, through listening to audition samples. I was looking for a Midwest voice, so imagine my surprise when Karen turned out to be English and living in Texas! I knew she was the one to voice Maggy, though, the moment I heard her. She matches the voice I hear in my head when I’m writing–probably very scary for her!! 🙂

If someone is thinking about creating an audio book, what advice would you give them?
I wrote a two-part article for Southern Writers Magazine’s Jan/Feb and March/
April 2013 issues. Check it out–I think you’ll find it very helpful. What else would you like to share with readers about your audio book?
Publishers Weekly: “In her delightful debut, Balzo puts a 21st-century spin on the traditional cozy, replacing tea with coffee as the comfort beverage of choice. Readers will want to curl up with this winner with a cappuccino or maybe even a Viennese cinnamon latte.”

Chicago Tribune: “…as wonderfully rich and sharply written as anything going. What moves Balzo’s book high above other writers who try to cover the same territory is a sharp and often amusing skill that convinces us that this is real life, and that it matters.”