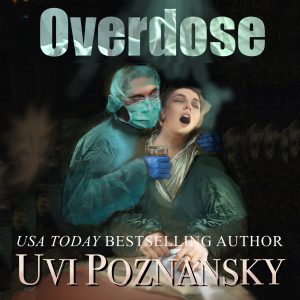 Months after recovering from coma, Ash discovers that the man who performed her brain surgery has a questionable medical experience and a dark past, starting with his medical mission in India, 10 years ago, and ending just recently, with his wife’s suicide. Should Ash expose him at the risk of becoming vulnerable to his revenge?

In an attempt to learn more, Ash goes on a date with him. When the waitress drops a pink cellphone into her hand, she is hit by a bullet. On the cellphone are his wife’s last words: “Perhaps, you have the urge to shut me off or, at least, to ignore what I’m about to say. But listen you must, because even if you don’t believe it, you’re already much too close to danger…. Neil is my undoing. Make sure he isn’t yours.”

What was your inspiration for this book?
Overdose was inspired by the previous books in the series, because the character of Ash was already living inside me and was looking for a way to express what happened to her after she woke from her coma.

My new series, Ash Suspense Thrillers with a Dash of Romance, is hitting the shelves with two books:

Ashley finds herself in the ER diagnosed with coma. She has no memory of what has happened to her. Despite what everyone around her may think, Ash can listen to the conversations of her visitors. One of them in particular strikes her as a possible suspect in her recent rape.
For Ash, there is little time to gather clues: blackouts are happening not only in the hospital but in Irvine and other places in California, and the Russian hackers who are intent on sabotaging the power grid are trying to blackmail her boyfriend, Michael, into helping their cause. And what better way for them to do it but by kidnapping her?

Haunted by discovering the body of Lace, a beautiful dancer whose throat has been slit, Michael sets out to create a virtual reality simulation of her murder. Can he bring the mystery to life? Can he solve its clues in time, before the killer turns on the woman he loves, Ash?
Suffering some memory loss due to a violent incident in her own past, Ash is unable to identify her attacker. Despite the persistent fear, she puts her life in danger to draw out the man she suspects of killing Lace, so as to avenge her murder.
Meanwhile, the cops treat Michael as their prime suspect. The only reason they haven’t arrested him yet is an urgent rescue mission, as Laguna Beach is engulfed in flames. Will Michael manage to slip away from them and save his sweetheart before it’s too late? Will he catch the murderer?

How did you choose the reader for the book and the production company?
Heather Jane Hogan has narrated several of my audiobooks, and I am always curious to learn about her craft. So at the completion of ou new project, the audiobook edition of Overdose, I asked her to write about her craft. This is what she writes about the way she found the voices for my characters in Overdose:

"I just love the way Uvi writes. She has a haunting turn-of-phrase that really gets under my skin. Finding voices for this book wasn’t as challenging as the previous book, Coma Confidential, because a few of the characters were the same – however, I did have some trouble finding the right voice for Michael since he wasn’t as prevalent in Coma Confidential as he was in Overdose, and Uvi asked me to change it up a bit because I started him off too aggressive. She was right, of course, and that gave me room to make Dr. Patel the aggressive one.

I also liked that Mrs. Winters was in this more; I enjoy doing her voice. I based that character on a close relative, who is as pretentious as they come (and I love the dickens out of her).

As far as Karishma, the Indian dialect isn’t one I’m fully adept at, so I went with a softer, less confident voice to help with that. Also, whenever I do a dialect I’m not 100% familiar with (like Indian), I have to say a phrase before each line of dialogue. For Indian, its “Oh my holy cow.” Don’t ask me why; I don’t remember the origin, but for some reason, saying that helps put my mouth in the proper form to then speak with that dialect."